Iqra Aziz and Sadia Ghaffar have quality time together with their babies.

Sadia Ghaffar was born on August 29, 1993, in Karachi. In the year 2021, she was 27 years old. Sadia Ghaffar is a Pakistani artist who is both brilliant and attractive. Sadia has played a variety of personalities in many drama series. Ghaffar has proven her versatility as an actress, and her admirers have always adored her. She has taken part in a number of well-known Pakistani drama series, including Kis Din Mera Viyah Howay Ga, Gul-e-Rana, and Asi Hai Tanhai, in which she had a supporting character. Hassan Hayat Khan, an actor, is married to Sadia Ghaffar. Raya Hassan Hayat Khan, the couple’s daughter, was born to them. 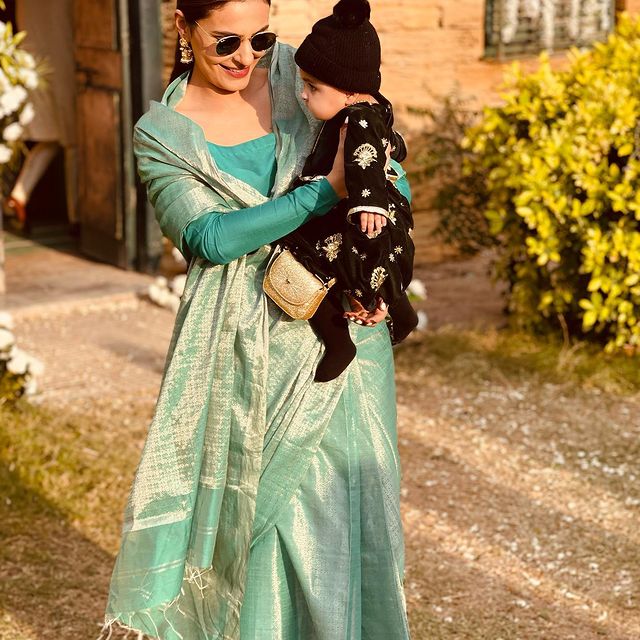 Iqra Aziz Hussain was born on November 24, 1997, in Karachi, Pakistan. She is well known for her work as Jiya in Momina Duraid’s Suno Chanda (2018), for which she won the Lux Style Award for Best Television Actress. The Citrus Talent Agency chose Aziz after he auditioned as a campaign ad model. She made her acting debut in Kissey Apna Kahein as a supporting character, and her first main role was in the 2015 romantic series Muqaddas. Iqra went on to star in Deewana, Laaj, Socha Na Tha, Choti Si Zindagi, Natak, Gustakh Ishq, Ghairat, Qurban, Suno Chanda, Tabeer, Ranjha Ranjha Kardi, Jhooti, and Khuda Aur Muhabbat 3.